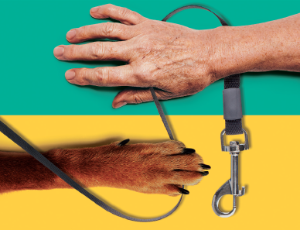 Todd, Laura, Lucy. From the sound of it, the two military veterans could be mentioning relatives or teammates. Yet their tone is more like that of teachers, recalling star pupils or the class clown who later shaped up. Charles, Dewey, Shannon.

All those named are indeed pupils — canine ones. They are service dogs in training, and the classroom is usually a field among farms in Boyds, Md. The students are Golden or Labrador Retrievers that are bred, trained, and placed by Warrior Canine Connection (WCC), a nonprofit organization serving veterans and military families.

The two veterans, both women, bonded with the dogs during research conducted by the University of Maryland School of Nursing (UMSON) in partnership with WCC. The study’s purpose is to understand how canine interaction, motivated by a desire to help other veterans, affects stress in veterans with post-traumatic stress disorder (PTSD).

Principal Investigator Erika Friedmann, PhD, associate dean for research and professor at UMSON, seeks to establish the health impact by measuring physiological and post-traumatic stress symptoms of veterans enrolled in the study as trainers.

“A large number of veterans suffer from PTSD. It’s important to develop ways to help them that are complementary to other treatments,” says Friedmann, observing that individuals respond differently. “There are many modalities.”

Friedmann and collaborator Cheryl Krause-Parello, PhD, of Florida Atlantic University, are leaders in the field of anthrozoology, the study of human-animal interactions. They published evidence last year that dog walking affected stress indicators in veterans with PTSD and suggested further inquiry. Previously, in a 1995 study of heart patients, Friedmann found that pet ownership and social support are predictors of survival.

Friedmann’s latest study, “Evaluating the Efficacy of a Service Dog Training Program for Military Veterans with PTSD,” began in 2019 when UMSON received a $438,787 grant from the Eunice Kennedy Shriver National Institute of Child Health and Human Development.

So far 40 veterans have enrolled out of 60 expected to enter by early next year. Participants are paid for their time, and the research team follows strict COVID-19 pandemic safety protocols.

Eligible veterans are randomly assigned to one of two paths: an eight-week, online education course in service-dog training or eight weeks of hands-on dog training. They are encouraged to continue as volunteers with WCC, whose trainers expertly guide human-canine matchups.

For each group, researchers use surveys and biomarkers to assess impact. The dogs, too, see veterinarians to check well-being.

Ahead of the Pack

People have long asserted that animal companionship has health benefits—even Florence Nightingale wrote about how pets are valuable for recovery—but there has not always been evidence to support the claim.

Widely regarded as a pioneer in the relatively young field of anthrozoology, the scholarly investigation of human-animal interaction, Erika Friedmann, PhD, associate dean of research, was the first to publish a study on the cardiovascular health benefits of pet ownership in a peer-reviewed journal. Friedmann is also a founding member and third-time president of the International Society for Anthrozoology and was awarded the International Association of Human Animal Interaction Organizations’ Johannes Odendaal Human-Animal Interaction Distinguished Researcher Award in 2016.

That initial study inspired decades of further investigations on the impact of the ownership of and interaction with companion animals on human health and function across the lifespan. She confirmed that pet ownership is related to survival in patients with heart disease through two additional studies and has also researched other benefits of pet ownership, such as lowering blood pressure, decreasing stress responses, and increasing social interaction. Overall, Friedmann’s findings have provided rich data demonstrating how pet ownership can improve mental, social, and physiological health status with respect to cognitive functioning, depression, stress responses, anxiety, cardiovascular health, healthy aging, and more.

“Pets can reduce stress, they can reduce depression and loneliness, and they can be beneficial in terms of getting people to exercise,” Friedmann explains.

Last December, Friedmann and Barbara Resnick, PhD ’96, RN, CRNP, FAAN, FAANP, professor and Sonya Ziporkin Gershowitz Chair in Gerontology, were awarded a threeyear, $340,000 grant from WALTHAM and Mars Petcare to examine the role of pet ownership in maintaining both physical and mental function in healthy older adults. As part of the project, the researchers designed a pet ownership questionnaire for participants in the Baltimore Longitudinal Study of Aging (BLSA), the longest-running scientific study of human aging in the world; it began in 1958. They will look at extensive data collected by the BLSA along with the pet ownership information collected through the questionnaire to determine if there are any links to changes in healthy aging over time.

“Our idea is to look at trajectories of changes and compare pet owners with non-pet owners,” Friedmann says. “We ask them about the kinds of animals, their attachment to the animals, the amount of contact they have with their animals, and their pet ownership history. And then we can use the BLSA data to look at how it’s related to changes in health; for example, changes in depression or cognitive functioning over time.”

In the future, Friedmann hopes to connect the dots and understand exactly who will benefit from animal companionship and in what ways.

“There is research to show that people are more willing to walk if they’re walking a dog rather than walking by themselves,” she explains. “For people who live alone and don’t have much opportunity for contact with others, walking a dog might be a way to meet others and have a conversation. People who are anxious and afraid to leave their home might gain confidence from having an animal accompany them. Children with autism who can’t be in public places because they are bothered by the noise may be able to face the world better with a dog by their side.” Though she’s found proof over the years of the benefits of pet ownership, Friedmann notes that it isn’t for everyone. However, that doesn’t mean there aren’t other ways to take advantage of the positive health outcomes that come from pet companionship. “Go volunteer at an animal shelter or take your neighbor’s dog for a walk,” she says. “Those are good ways to get the benefits without owning a pet.”