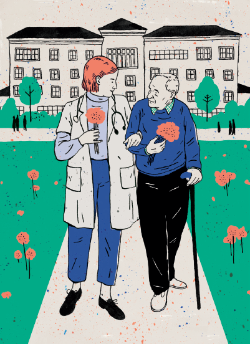 As the Baby Boom generation ages, long-term care facilities are experiencing a boom of their own: The U.S. Census Bureau projects the number of residents to reach 56 million by 2020 and balloon to 74 million by 2030. Instead of entering traditional nursing homes, many relatively healthy older adults are choosing to reside in assisted-living facilities (ALFs), homelike environments that do not typically provide skilled care and rehabilitation.

“The number of nursing home beds is staying relatively stable, but ALFs are really growing,” explains Alison M. Trinkoff, ScD, MPH, RN, FAAN, professor, adding that traditional nursing home care “is based on the medical model, while ALF care is developed out of the social care model. However, most long-term care populations will ultimately require nursing care and socially supportive environments.”

The regulations for ALFs, however, are generally less stringent than those for nursing homes, which are licensed and overseen by the federal government and are rated according to uniform standards.

On the other hand, individual states determine the oversight and training requirements for ALFs, which Trinkoff says is concerning as the number of residents with chronic diseases and cognitive problems living in ALFs increases.

91 percent of older adults have one or more chronic health conditions that may erode their ability
to live independently.
— Institute on Aging

“Studies have shown that an RN presence in a nursing home makes a big difference in terms of quality of care, so it stands to reason this would be similar on the ALF side,” says Trinkoff, who has spent 30-plus years as a nurse researcher at UMSON and received grants from the National Council of State Boards of Nursing in 2013 and 2015 for long-term-care-related research projects.

Her latest work, published in Nursing Outlook in June, compiled ALF administrative and regulatory data from across the country and compared it to nursing home data. She found that, overall, ALF regulations varied widely and were less stringent than those of nursing homes in each category they studied: staffing levels, training hours, and regulatory oversight.

“Seeing the data side by side will open up the conversation about why these two sectors are so different,” Trinkoff says, adding that the data could give state-level policymakers the leverage they need to strengthen regulations for ALFs. “People are living longer and better, and there is only going to be more demand for long-term care facilities. Safeguarding residents by ensuring quality care is an important priority.”

Trinkoff’s team over the course of these projects has included around a dozen faculty and student researchers, including clinical faculty member Nancy B. Lerner, DNP ’10, MS ’74, BSN ’66, RN, CDONA, associate professor, who has served as the director of a nursing home. “Her insights and experiences really added a lot to the project,” Trinkoff says. “It’s one thing to have the research perspective and see the gaps, but it’s another thing to have the perspective of someone who has been immersed in long-term care leadership who also knows the research literature.” 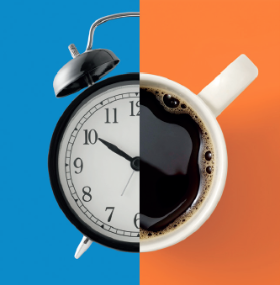 "Much of the problem of nurse fatigue is a result of the long hours worked and shift rotation, which affects the amount and quality of sleep," says Professor Alison M. Trinkoff, ScD, MPH, BSN, RN, FAAN. In 2015, she and former faculty member Jeanne Geiger-Brown, PhD ’01, RN, FAAN, co-authored an online, evidence-based training program that aims to minimize the health and safety risks associated with shift work, long work hours, and related workplace fatigue issues for nurses. The program recently won the 2017 Bullard-Sherwood Research to Practice Intervention Award from the National Institute of Occupational Safety and Health.

Below are seven strategies culled from the training that you can use to improve alertness at work.

If you can regularly squeeze in a two-hour nap before night shifts or a 20-minute nap during breaks, you should feel more refreshed. Some health care workplaces even offer quiet spaces for uninterrupted naps. Just remember that naps are not a replacement for regular, long periods of sleep.

Rest on days off is essential to promote healing from muscle strains and to help reduce the chance of injury. Ideally, you should rest for one or two full days following five consecutive eight-hour shifts or four 10-hour shifts and rest for two days after three consecutive 12-hour shifts.

3. Take breaks during your shift.

Consider stretching or taking a brisk walk; both can help you relax and reset. Some breaks should be taken outside of the unit you are working in to be most effective.

Avoid sugar-rich products and low-fiber carbohydrates, as these can increase sleepiness. Instead, eat foods such as vegetables, fruits, whole-grain sandwiches, yogurt, eggs, and nuts.

Judicious intake of caffeine during your shift can aid alertness. Keep in mind that you should not drink coffee near the end of your shift if you plan to go home and sleep.

After working night shifts, don these sunglasses (wraparound style is best) to reduce the chance that your body clock resets to daytime, which makes it difficult to sleep. Keep them on until you are in a dark room at home.

Whether you’re sleeping at night or in the daytime, your bedroom should be very dark. Block light with opaque window coverings—light-blocking shades are inexpensive and available at most hardware stores—and prevent light from coming through under doorways. You can also wear an eye mask.

For some nurses, it may be necessary to advocate for a more healthful schedule. If you find yourself in that situation, you may be able to utilize evidence from the training program to make your case.