Try to find out why things are done, to be familiar with underlying principles as well as details of practice. Learn to nurse by reason rather than rule, for no rule can be laid down to which exceptions will not arise. Do not fancy that after you have been through a training school you will know all there is to know about nursing; in fact, you will only have been taught how to learn, how to appreciate and profit by the experience which you will get. Every new case will teach you something new. 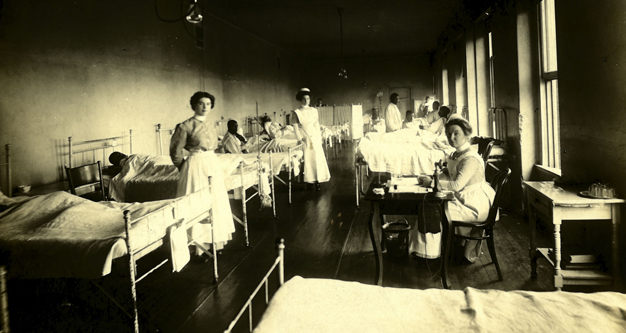 A great deal of teaching was done by the head nurse on the ward who was most likely a senior pupil nurse. Equipment and supplies were very limited. It was quite common to have only three thermometers and six bed pans for a whole floor.

Working shifts were twelve hour duty, seven to seven with one-half day off per week. The student working day was relieved three hours during her shift by her senior. She compulsively attended classes October through May. The Superintendent of Nurses taught theory, anatomy to pharmacology and the Assistant Superintendent taught nursing arts and skills, demonstrating on the ward patient....Evenings were short. Class, homework, studying and reading occupied much of the off duty time.

Early nurse leaders recognized the ability of a uniform to combat the image of the slovenly nurse made famous by Charles Dickens' character Sairy Gamp. Rooted in nursing's religious and military heritage; tailored uniforms like this one became standard student dress across the nation during the 1890s. Nurses' uniforms conveyed considerable authority even as they captured the hearts of the public. Student nurses, now cast as gracious "gentlewomen," forced themselves into boned corsets to achieve the desired hourglass female silhouette. 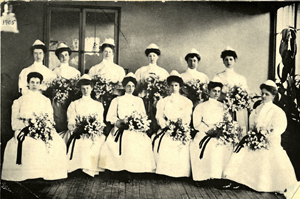 On left: Reproduction of a 1905 student uniform.