History of the School of Nursing

HomeLiving History MuseumVirtual TourHistory of the School of Nursing

In the Beginning: Foundation of the School in 1889

On the morning of Dec. 14, 1889, three women, two from Baltimore and one from Maryland's Eastern Shore, became the first students to enter the Maryland University Hospital Training School for Nurses. Under the direction of Louisa Parsons, nine students eventually graduated with the first class, the Class of 1892.

Before 1889, hospital nursing was done by two Catholic religious orders, the Sisters of Charity (1823-1880) and the Sisters of Mercy (1880-1889). By replacing nuns with trained nurses, the University joined a growing trend; the nation's 107 training schools increased fivefold from 1889 to 1900.

A Hospital Training School for Nurses

The University of Maryland School of Nursing was founded in 1889 by a medical school faculty member hoping to improve nursing service in its teaching hospital. For the next 60 years, hospital demands shaped the educational experience of student nurses, who underwent a rigorous apprenticeship emphasizing respect for authority, self-discipline, and the perfection of nursing skills through practical experience in the hospital ward.

Limited in their ability to improve educational standards, training school leaders nonetheless managed to prepare students for careers in the emerging profession of nursing. And with some exceptions, students completed their training with justifiable pride in their accomplishments, confident in their new identity as graduate nurses.

Louisa Parsons: Founder of the School of Nursing 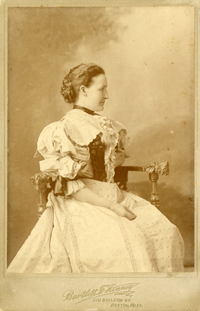 ‌At the time of her appointment as School of Nursing superintendent, Louisa Parsons was better known as a decorated military nurse. Handpicked by Florence Nightingale, Parsons accompanied British soldiers on two campaigns into Egypt and the Sudan between 1883 and 1885. For her service, she was awarded British nursing's ultimate accolade, the Royal Red Cross.

On left: Profile picture of Louisa Parsons, ca. 1887, the founder of the University of Maryland School of Nursing.