The School of Nursing and Military Nursing Today 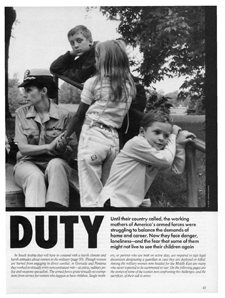 A year after earning her masters' degree from the School of Nursing, Commander Barbara Vernoski bid a tearful farewell to her family as she became one of 11,000 women deployed in the Persian Gulf. Vernoski was stationed aboard the USNS Comfort, a 1,000-bed "Mercy Class" hospital ship, built in 1987 to provide mobile responsive care to acute medical and surgical cases during military hostilities.

On right: Vernoski sitting with her family before deployment. Image from “A Mother's Duty,” featuring Barbara Vernoski and family, People, September 10, 1990.

The War on Terror

This letter was sent with an accompanying flag and certificate to Janet D. Allan, PhD, RN, FAAN, dean and professor, School of Nursing, 2002-2012. The flag was flown in her honor at Combat Support Hospital, Camp Dwyer, Afghanistan.

I’m a former University of Maryland nursing graduate. At this time, I proudly serve in the U.S. Army as a critical care nurse. Last year, I deployed to Afghanistan for six months. I want to let you know that thanks to your leadership and trust in me, I was able to enter nursing school and graduate as a nurse. You opened the doors of a great career and I will be forever grateful to you. America thanks you, my family thanks you, and I’m very proud of have earned my BSN at UMB.

God bless you and thank you very much.

From 2007 to 2009 the Army Nurse Corps and UMSON partnered to bring six Army nurse officers to teach at the School of Nursing. Maj. Gen. Gale S. Pollock, commander of the U.S. Army Medical Command, acting surgeon general, and chief of the Army Nurse Corps at the time, came up with the idea for the partnership while discussing nursing issues with Dean Janet D. Allan.

Pollock graduated from UMSON in 1976, one of 1,219 nurses completing the Walter Reed Army Institute of Nursing (WRAIN) program during its 14-year existence, from 1964 to 1978. The program required graduates to serve three years in the Army Nurse Corps after graduation; the graduates were affectionately known as “WRAIN-drops.”

Back to the Virtual Tour home page.