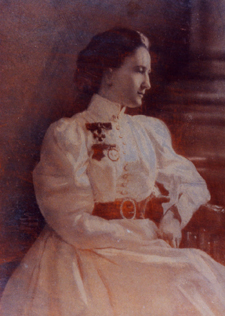 Louisa Parsons, first superintendent of the University of Maryland School of Nursing, had a decorated military career before and after her time at the School of Nursing. Parsons was born in Devon, England, served as a nurse in the early 1880s in Egypt and the Sudan with the British Army, and was awarded both the Victoria Royal Red Cross from England and a medal of thanks from the Khedive of Egypt.

After stepping down as the first superintendent of the School of Nursing, Parsons continued her life of military service. During the Spanish-American War (1898), she served at Atlanta's Fort McPherson as part of the U.S. Army Hospital Service. Following that stint, she went back to England to serve as a nurse in the Second Boer War (1899-1902), in modern day South Africa.

Next - World War I