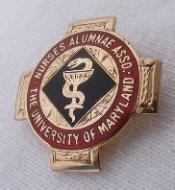 When Bellevue Hospital in New York started a nurses’ training school in 1873, a board member suggested “a badge for the probationers and the same with a medal attached for the head nurses.” Out of this idea came the concept of a nursing school pin. Bellevue presented its first pins — the first nursing school pins — in 1880.

The University of Maryland School of Nursing opened in 1889, and the tradition of a class pin began in 1894, when students selected a design by Tiffany’s of New York. None of these original pins survive, but the official School of Nursing pin is a modified version of the original design.

The design features the St. George’s cross in gold. In the center of the cross is a variant of the bowl of Hygeia, the serpent representing wisdom, entwined around a glass that is symbolic of the “wise presiding over decoctions of medicine.” Though commonly a symbol used by pharmacists, the variant on the pin is the snake design found on the wand of Asclepius, a symbol used by the nursing profession. The bowl of Hygeia is set on a field of black surrounded by gold with a maroon circle around it containing the words, “University of Maryland School of Nursing.”

In 1970, the Alumni Association offered the design of the alumni pin to the dean of the School of Nursing to become the official nursing pin. It is now awarded to all graduates of the University of Maryland School of Nursing. 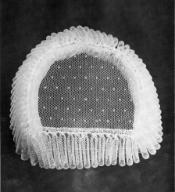 The University of Maryland School of Nursing cap, known as the “Flossie,” was designed in 1892 by the School’s first superintendent, Louisa Parsons, who modeled it after one of Florence Nightingale’s own caps. The elaborate point d’esprit lace was made in England and required special care to maintain. Convinced that too much time and effort went into making and laundering the lace Flossie, in 1900 then-Superintendent Katherine A. Taylor simplified the design and designated it as the graduate cap.

The Flossie was UMSON’s official graduate cap and served for decades as a symbol of the wearer’s professionalism and the School’s connection to the founder of modern nursing. Several traditions surround the Flossie at UMSON: In the early years, a ceremony known as “capping” took place as a rite of passage. From the late 1950s onward, an event was held for the seniors, who were taught how to string their Flossie caps in the final weeks before graduation. In later years, a fluting ceremony was held after the six-week probationary period for each student nurse. If she was progressing satisfactorily, she was allowed to flute her cap and continue her studies. By the 1970s, the fluting tradition continued, though it no longer marked the end of the probationary period. The fluting banquet grew into an involved night that included skits, songs, laughter, and food, in addition to seniors helping the juniors learn how to flute their caps.

Learn More About the Flossie 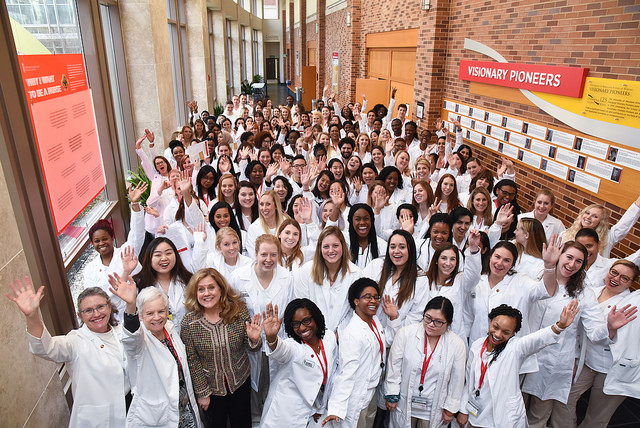 Since 2014, incoming Bachelor of Science in Nursing (BSN) and Master of Science, Clinical Nurse Leader students are cloaked in white coats at a ceremony that occurs during the first semester of their program. The purpose of the ceremony is to instill a commitment to providing compassionate care among future health professionals entering nursing schools.

The School was one of 100 nursing schools to receive funding support through a collaborative effort between the Arnold P. Gold Foundation (APGF) and the American Association of Colleges of Nursing (AACN) to pilot White Coat Ceremonies. The purpose of the program is to instill a commitment to providing compassionate care among future health professionals entering nursing schools.

View galleries and materials from past ceremonies: 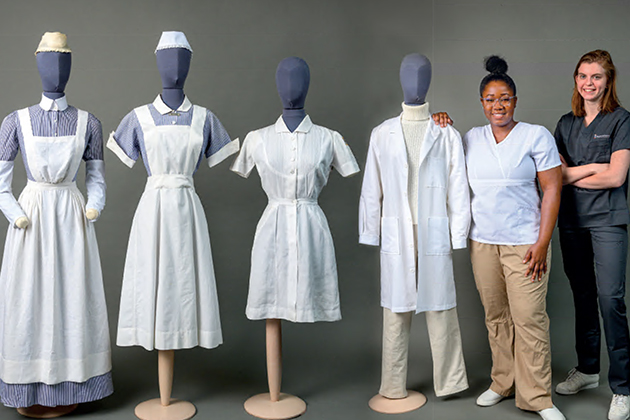 With a history as old as the School itself, UMSON’s student uniforms through the ages reflect nurses’ professional and societal roles.

Tailored uniforms that covered neck to toe and conveyed authority were the standard for nursing schools nationwide in the 1890s, when UMSON first opened its doors.

As decades passed, skirts and sleeves grew shorter, but aprons and caps remained until the second half of the 20th century.

As the women’s movement took hold, and nurses occupied new roles, uniforms became more practical. Scrubs and lab coats eventually became the norm as nurses claimed their space as scientists and practitioners who are critical members of the professional health care team.

The historical uniforms pictured here are all housed in UMSON’s Living History Museum.