State of the School

“This is the first time we have held a virtual State of the School, but given the past 13 months, this is not the first virtual event for any of us,” Kirschling said.

During the address, she focused on all that the school has accomplished and what its faculty, staff, and students have learned during the past year, then commented on how the school can harness this to shape its path forward. The 2020 State of the School address was canceled in spring 2020 at the height of the pandemic.

“Ceremonies for breaking ground, or turning the first sod, are centuries old and span cultures,” Kirschling explained. “The symbolism of a groundbreaking is especially apt this spring, as we cautiously emerge from more than a year defined by the pandemic of COVID-19. It has been a time that we could not have imagined.”

Throughout the pandemic, “we have continually broken new ground,” she said.

Overcoming challenges related to responding to the pandemic, both in clinical and virtual classroom settings, was the result of the hard work and resilience of UMSON’s faculty, staff, and students. Looking ahead, she noted five key areas on which the school will focus to forge new pathways to excellence:

The digital version of the State of the School program includes honors, awards, and accomplishments for April 2019 - March 2021.

Past State of the School Addresses

Reflecting on the many ways the School is meeting nursing needs in the state, nationally, and even globally, University of Maryland School of Nursing (UMSON) Dean Jane M. Kirschling, PhD, RN, FAAN, delivered her 2019 State of the School address on April 11 in Baltimore, with a repeat performance at the Universities at Shady Grove on April 23.

"I wrote recently in my column for the spring 2019 issue of our Nursing For/um magazine, that we often think of ourselves as the quintessential Maryland institution, given our role within the University of Maryland System, UMB, and the State of Maryland. But, we are also part of a vibrant national and international nursing community and that brings its own set of responsibilities," Kirschling said, addressing an audience of University of Maryland, Baltimore (UMB) leadership, UMSON faculty, staff, students, and other invited guests gathered in the UMSON auditorium.

The event started off with a "virtual tour" video created to attract the 440 entry-level students the school admits each academic year. This year's address also featured a series of short videos highlighting various research projects, academic programs, student support and success, and initiatives that are addressing the often-cited 2010 Institute of Medicine report, "The Future of Nursing: Leading Change, Advancing Health," which, Kirschling said, has substantially reshaped the landscape of nursing education and all aspects of the profession, in Maryland, regionally, and nationally.

"The School of Nursing not only responds to Maryland’s needs, but as a program ranked in the top tier of all schools with master’s and doctoral programs, we have a special obligation to help lead the way in responding to national needs," she said.

Kirschling said UMSON is responding to the needs:

Among other highlights of the annual review of the School’s accomplishments, 742 new degrees and certificates will have been conferred this academic year. UMSON’s increasing presence at the Universities at Shady Grove (USG) is a reminder of the importance of USG in providing access to nursing education for students from the capital region and Western Maryland, Kirschling said.

The State of the School also highlighted:

Reflecting on the past year’s accomplishments and on challenges ahead, University of Maryland School of Nursing (UMSON) Dean Jane M. Kirschling, PhD, RN, FAAN, delivered her 2018 State of the School address in Baltimore on April 11 and at the Universities at Shady Grove on April 17. 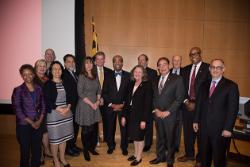 “It is an important time in nursing as we respond to the evolving needs of our patients, our communities, and the health care system,” Kirschling said. “Addressing this has implications for all aspects of our work as a school — education, research, practice, and service — and for our vision and strategies for the future.”

“As I talk about the accomplishments of the past year and the challenges ahead, I want to frame this in the context of two forces that are driving changes in what we do,” Kirschling continued. First, she cited the landmark 2010 Institute of Medicine report The Future of Nursing: Leading Change, Advancing Health, which calls on colleges of nursing to increase the percentage of nurses with baccalaureate degrees from 50 percent to 80 percent by 2020; double the number of nurses with doctoral degrees; implement early and continuous interprofessional collaboration; and provide opportunities for continuous learning across the spectrum of a nurse’s career.

Second, she said, Maryland needs to ensure it has the nursing and health care workforce to provide effective and compassionate care to individuals, families, and communities. 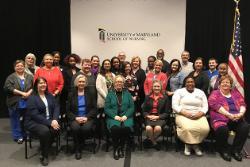 “We take seriously our responsibility as an institution within the University of Maryland, Baltimore, and the University System of Maryland to serve as a leader for excellence in nursing throughout the state,” she said. “As we respond to these forces, our actions are informed by the 2017-2021 Strategic Plan for the School of Nursing and the foundation provided by the University plan. We are now about one year into implementation of the plan, and it has guided our priorities.”

Additionally, Kirschling highlighted accomplishments of UMSON and its faculty and staff.

“My hope is that today’s State of School leaves each of you with a better understanding of our work over the past year and our vision for the future,” Kirschling said. “But more importantly, I hope that it reminds you that what we do is only a very small piece of what we truly accomplish — every action is indeed a statement. We are fortunate to have students, faculty, staff, and alumni who want to make a difference.”

View the State of the School 2018 program. 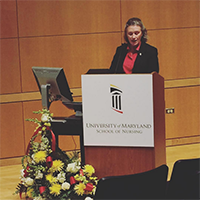 ‌Dean Jane M. Kirschling, PhD, RN, FAAN, delivered her 2017 State of the School address on April 19, 2017, to University of Maryland, Baltimore leadership, School of Nursing faculty and staff, and other special guests.

During her address, Dean Kirschling emphasized the importance of preparing nursing students to adapt to the evolving needs of patients, communities, and the health care system. One of the central challenges the School’s educators face is how to develop and prepare students for a nursing workforce environment characterized by increasing complexity of care, an increasingly diverse and aging population, and multiple sites of care delivery. Addressing these needs has implications for each of the School’s key components—education, research, practice, and service—and ties directly into the School’s vision and future strategies for the next five years.

In response to the ongoing challenges facing nurse educators, the dean outlined the School’s strategy to uphold the recommendations found in the Institute of Medicine’s 2010 landmark report, The Future of Nursing: Leading Change, Advancing Health, which called on colleges of nursing to increase the percentage of nurses with baccalaureate degrees from 50 to 80 percent by 2020; double the number of nurses with doctoral degrees; implement early and continuous interprofessional collaboration; and provide opportunities for continuous learning across the spectrum of a nurse’s career. Additionally, Kirschling highlighted accomplishments of the School and its faculty and staff.

Watch the 2017 State of the School address: 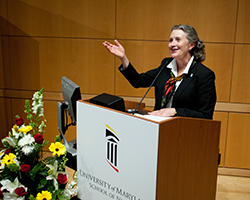 Dean Jane M. Kirschling , PhD, RN, FAAN, recently delivered her 2016 State of the School address to University of Maryland, Baltimore (UMB) leadership, School of Nursing faculty and staff, and other special guests. During her address, Transforming Nursing: Living Our Core Values, Dean Kirschling informed attendees about how the School is responding to some of the significant challenges facing nursing, while maintaining the core values of UMB and the School of Nursing.

In her address, the Dean outlined the School’s response to the Institute of Medicine’s (IOM) 2010 landmark report, The Future of Nursing: Leading Change, Advancing Health, which called on colleges of nursing to increase the percentage of nurses with baccalaureate degrees from 50 to 80 percent by 2020; double the number of nurses with doctoral degrees; implement early and continuous interprofessional collaboration; and provide opportunities for continuous learning across the spectrum of a nurse’s career. Additionally, Kirschling highlighted the accomplishments of the School, faculty and staff.

Faculty, staff, students, alumni, and special guests assembled at the School of Nursing on April 8 for Dean Jane Kirschling's first annual State of the School Address. The presentation, "Academic Nursing: Maryland and Beyond," highlighted 2014 faculty, staff, and departmental successes, as well as new traditions, culminating with a look ahead to the future.

Dean Kirschling began with some recent highlights, which included the School's new No. 6 ranking by U.S. News & World Report. Eight of the School's master's specialties/options are ranked in the top 10 and two — Clinical Nurse Leader and Nursing Informatics – are ranked No. 1

Speaking to new traditions, Dean Kirschling noted the creation of the School of Nursing ceremonial mace; the White Coat Ceremonies that started last fall; the Dean's List for BSN students; and December graduation ceremonies, held for the first time in School history.

Enrollment numbers, which remained consistent through 2014, included a 10 percent increase in the entry level and RN-to-BSN admissions figures. Dean Kirschling was also pleased to announce that the School's student body is comprised of 36 percent minorities, 10 percent higher than the national average of minorities in nursing programs.

"Diversity is one of the University's core values and remains a point of pride for the School of Nursing," Kirschling said. "The diversity of our student body differentiates us from many schools of nursing across the country."

"An important facet of academic nursing is seeking and developing opportunities for nursing leadership," Kirschling said. "The School of Nursing has a legacy of producing nurse leaders and I'm pleased that we have so many on our faculty."

Staff contributions have also played a significant role in the growth of the School. The Office of Development and Alumni Relations had a banner year. As of March 31, $2.65 million was raised toward a $3.2 million goal—83 percent of the annual fundraising total.  Several of the School's staff members received achievement awards; the Student Success Center had its initial Who Will Caregrant renewed; and the Office of Communications redesigned the School's website, magazine, and e-newsletter.

Dean Kirschling closed her address with her vision for the future. She'd like to see continued opportunities for nursing academic leadership, grant funding, and student success; recruitment and retention of high-quality faculty; and exploration of new models of care in response to the needs of the community. In addition, she wants the School to take advantage of partnerships with the University System of Maryland; within the University of Maryland, Baltimore; and any technological opportunities that may be possible.

"As we move forward, we must ensure that our goals are in alignment with the core values of the University – accountability, civility, collaboration, diversity, excellence, knowledge, and leadership," she said. 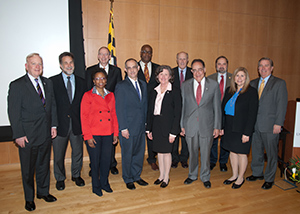 (right) Dean Jane Kirschling with colleagues at her first annual State of the School address.