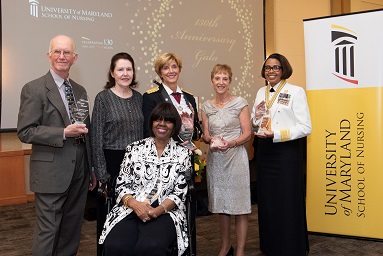 Baltimore, Md. – The University of Maryland School of Nursing (UMSON) commemorated its 130th anniversary on Saturday, Sept. 21, with a gala honoring its impact on nursing education and its continued leadership in Maryland and around the world. At the gala, the School inducted five new alumnae Visionary Pioneers, who are selected for their significant impact on, and contribution to, the field of nursing based on their leadership, innovation, or entrepreneurship.

The new Visionary Pioneers join the 25 alumni recognized on the occasion of UMSON’s 125th anniversary in 2014. Every five years, UMSON names an additional five Visionary Pioneers to this esteemed group, composed of alumni who have rendered distinctive service to nursing and health care through clinical practice, education, or scholarship and research. The newly inducted Visionary Pioneers include:

At the gala, UMSON welcomed more than 100 guests as they recognized a rich and storied heritage and looked ahead to new and emerging challenges facing the field of nursing.

“It takes considerable fortitude and resiliency to reach 130 years, and the School of Nursing has an enviable record of accomplishments and ‘firsts’ over the course of these years,” said Dean Jane Kirschling, PhD, RN, FAAN, in a welcome letter included in the gala program. “No institution — particularly one with a compelling history such as ours — can rest on legacy alone. Every day, our past inspires us to commit our individual and collective intellect and energy to addressing the many and varied needs of our patients, communities, nation, and world — much as those who preceded us harnessed their talents and abilities to shape the accomplishments that we so admire today.”