Discover & Disseminate: Research Since the 1980s

In the 1980s, the School of Nursing emerged as one of the nation's premier nursing research institutions. With a high percentage of doctoral-prepared faculty members, the School aggressively promoted a comprehensive research program linked to community health needs. The School's ability to consistently qualify for Biomedical Research Support Grants from the National Institutes of Health testified to the hard work and commitment of its nurse scientists.

Research initiatives, doctoral dissertations, and scholarly publications attested to a research intensive environment that continued to advance the science of nursing, improve patient care, and promote the health of our communities.

When Mary V. Neal joined the School of Nursing faculty in 1968, she was already recognized as a distinguished Army nurse, American Red Cross disaster planning nurse, and pioneering nurse researcher. Neal's research with preterm infants, begun in New York in the mid-1960s, led to her invention of a "rocking hammock." Today her work is recognized as one of the classic early studies of stimulation in preterm infants.

As chair of the School of Nursing's Pediatrics Department, Dr. Neal helped establish a research program at University Hospital’s Neonatal Intensive Care Unit. A noted nurse theorist, she devised a conceptual basis for maternal child health nursing practice that became a model for many graduate nursing programs across the nation. Dr. Neal retired in 1983, having influenced thousands of nurse researchers throughout her illustrious career. 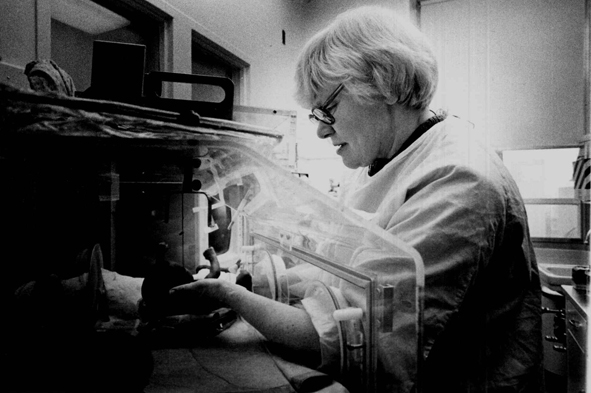 Next - Nursing Research Since 2000