Fellow is highest status within GSA. 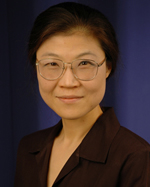 Baltimore, Md. – Eun-Shim Nahm, PhD ’03, RN, FAAN, professor and specialty director, Nursing Informatics, University of Maryland School of Nursing (UMSON), was recently named a fellow of the Gerontological Society of America (GSA) during its annual scientific meeting in New Orleans. Nahm was amongst 94 fellows inducted into this year’s class.

The status of fellow, the highest class of membership within the society, is an acknowledgment of Nahm’s continued outstanding work in gerontology. Inductees have contributed to research, teaching, administration, public service, practice, and notable participation within the organization. Fellows are chosen from each of the GSA’s four membership sections: behavioral and social sciences, biological sciences, health sciences, and social research policy and practice. Her membership is in the health sciences section.

Nahm, who has had several studies funded by the National Institutes of Health, specializes in developing and utilizing health IT programs to deliver more efficient, safer care to patients. Advancements in health IT have revolutionized health care by allowing patients to access their own electronic health records and offering enabling health tools; however, some patients, particularly older ones, have had problems transitioning to this technology. Nahm’s research examines the challenges of acclimating older adults to technological innovations that allow them to participate actively in their care.

“We congratulate Dr. Nahm on her selection as a fellow of the Gerontological Society of America.  It is a tremendous honor and speaks to her contributions to research, education, and practice,” said UMSON Dean Jane M. Kirschling, PhD, RN, FAAN.  “Dr. Nahm’s ongoing application of nursing informatics to developing interventions that promote and manage the health of older adults is an outstanding example of collaborative and interdisciplinary work.  It holds great promise for improving the lives of older adults, their families, and our communities.”

Founded in 1945, the GSA is a multidisciplinary organization devoted to research and education in all aspects of gerontology, including medical, biological, psychological and social, and is the driving force behind the advancement of gerontology both domestically and internationally.

“I am honored to be inducted as a fellow of the GSA, an organization that is devoted to research, education, and practice in the field of aging,” Nahm said.  “I have learned so much from many excellent GSA members, and I hope that I can do the same for others.”