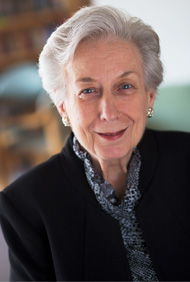 Jenkins is just second UMSON faculty member to be named Teacher of the Year in history of the award.

Baltimore, Md. – Louise S. Jenkins, PhD ’85, MS ’81, RN, FAHA, ANEF, professor and director of the Institute for Educators, University of Maryland School of Nursing (UMSON), recently was named the University of Maryland, Baltimore’s (UMB) 2016 Teacher of the Year during its annual Founders Week. Jenkins is the seventh UMSON faculty member to receive a Founders Week Award since the celebration was initiated in 1996.

In 2004, Jenkins co-founded the Institute for Educators to address the urgent statewide nursing faculty shortage. Under Jenkins’ leadership, the institute has contributed to a 63 percent increase in the number of new Maryland nursing school graduates sitting for boards and becoming licensed in the state; its effectiveness has been recognized through the awarding of multiple grants, totaling nearly $7 million, over the past 12 years. Jenkins also co-developed and leads the Teaching in Nursing and Health Professions Certificate program, which has equipped nearly 800 graduate and undergraduate students with the essential skills for teaching current and future nurses.

“Dr. Jenkins occupies a unique niche,” said UMSON Dean Jane M. Kirschling, PhD, RN, FAAN. “She is a highly accomplished and much lauded teacher, advisor, and mentor to individual students. She is a visionary and innovative educational leader who perceives how the art and science of teaching must evolve and is then able to move the enterprise.”

Each year, UMB celebrates the achievements and successes of its students, faculty, staff, alumni, and philanthropic support and pays tribute to its 200-plus-year history. As part of the celebration, awards are presented in four categories: Researcher of the Year, Public Servant of the Year, Teacher of the Year, and Entrepreneur of the Year.  Nominees for the Teacher of the Year award must have contributed to course development; created innovative teaching methods; developed student-initiated applications, evaluations, and student endorsements; and received past national and/or local teaching awards.

“There were so many emotions when [UMB President] Dr. [Jay] Perman told me I had been selected as Teacher of the Year,” Jenkins said. “I was surprised, thrilled, and very humbled by the honor of this award from my colleagues.”