UMSON gerontology chair has been in the field nearly 40 years. 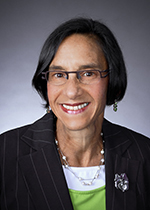 Baltimore, Md. – Barbara Resnick, PhD ’96, RN, CRNP, FAAN, FAANP, professor and Sonia Ziporkin Gershowitz Chair in Gerontology at the University of Maryland School of Nursing (UMSON), recently began a one-year term as president of the Gerontological Society of America (GSA). Resnick, who served as president-elect in 2016, has been a member of GSA since 1995.

GSA officers are responsible for overseeing the governance and strategic planning of the organization while representing the society’s four membership sections and its Emerging Scholar and Professional Organization. Resnick has previously served as GSA’s health section chair and was on the finance and publication committees.

“Dr. Resnick's outstanding accomplishments as a researcher and clinician dedicated to ensuring the best possible quality of life for older individuals speak volumes. As a highly regarded scholar and mentor, she has contributed significantly to how we think about the aging process,” said UMSON Dean Jane M. Kirschling, PhD, RN, FAAN. “Her deep commitment to working across disciplines to improve the science and practice of care for the elderly makes her ideally suited for the role of president of the Gerontological Society of America. We congratulate her on this singular honor and know that the society, and all of us, will benefit from her creative and dynamic leadership, her energy and drive, and her dedication to improving care for older adults.”

Founded in 1945, GSA is a multidisciplinary organization devoted to research and education in all aspects of gerontology, which include medical, biological, psychological, and social. It is the driving force behind the advancement of gerontology, both domestically and internationally.

“I am greatly honored to have been selected to serve as GSA’s president for 2017. Aging is of interest to all, given the increasing number of older adults nationally and internationally, and we are constantly developing innovative and exciting ways to optimize the aging experience in the world around us,” Resnick said. “It’s exciting to guide GSA in carrying out its ultimate mission of advancing the study of aging and disseminating information among scientists, decision-makers, and the general public.”