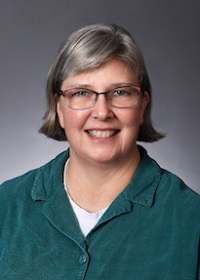 Baltimore, Md. – Cynthia L. Renn, PhD, MS '97, RN, associate professor, University of Maryland School of Nursing (UMSON), and four UMSON alumnae were inducted into the American Academy of Nursing (AAN) as fellows during the academy's annual policy conference, held this past weekend in Washington, D.C. They join a community of more than 2,500 AAN Fellows nationwide.

Renn's research focuses on understanding the cellular mechanisms underlying the development and persistence of neuropathic pain. Through her research, she aims to identify new therapeutic targets that could lead to developing treatment strategies to prevent and/or manage chronic pain and improve patients' quality of life. She also  mentors the next generation of nurse researchers — students and post-doctoral fellows — in all aspects of research, including the difficult technique of in vivo electrophysiological recording of spinal cord neurons in mice; Renn is one of only a handful of scientists nationwide who conducts such research.

The following alumnae were also among the 195 distinguished nurse leaders who compose this year's cohort of AAN fellows:

Criteria for selection as a fellow include evidence of significant contributions to nursing and health care and sponsorship by two current AAN Fellows. Applicants are reviewed by a panel of elected and appointed fellows, and selection is based, in part, on the extent the nominee's nursing career has influenced health policies and the health and well-being of all.

Fellows include nurse leaders in education, management, practice, policy, and research, including hospital and government administrators, college deans, and renowned scientific researchers. The Academy fellows, with the addition of this newest class, represent all 50 states; Washington, D.C.; and 29 countries.

Additionally, the following UMSON community members were named 2018 AAN Living Legends, the Academy's highest honor; they represent slightly less than half of this year's seven Living Legend designees. AAN recognizes a small number of fellows each year as Living Legends, who have been AAN fellows for at least 15 years and have demonstrated extraordinary, sustained contributions to nursing and health care.

"We congratulate our faculty member and alumna Dr. Cynthia Renn on her election as a fellow and are extremely proud of all of our alumni who have been recognized with this singular honor," said UMSON Dean Jane M. Kirschling, PhD, RN, FAAN. "We particularly salute the three members of our School of Nursing community who have been recognized as Living Legends and are truly grateful for their exceptional and longstanding service to nursing practice, research, and scholarship."

The American Academy of Nursing serves the public and the nursing profession by advancing health policy, practice, and science through organizational excellence and effective nursing leadership.

The University of Maryland School of Nursing, founded in 1889, is one of the oldest and largest nursing schools in the United States and is in the top 10 nationally for all of its ranked master’s and DNP specialties. Enrolling nearly 1,900 students in its baccalaureate, master’s, and doctoral programs, the School develops leaders who shape the profession of nursing and impact the health care environment.