Professor and chair honored for breakthrough research and influencing the next generation of nurses. 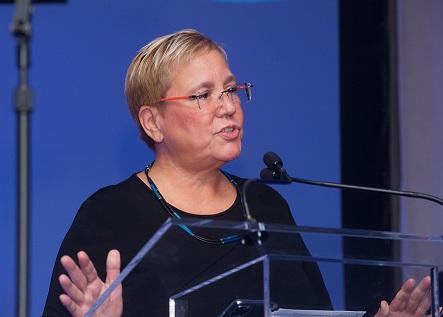 Dorsey was honored at FNINR’s 2019 NightinGala in Washington, D.C., held Oct. 23, where she was presented with the award in recognition of her contributions to developing strategies for the use of multiomics (e.g., genomic, transcriptomic, epigenomic, metabolomic) methods to identify the biological mechanisms underlying symptoms and self-management of symptoms. This work has led to new discoveries regarding genomic factors of neuromuscular weakness in muscular dystrophy and in the transition from acute to chronic pain across numerous conditions. The translational potential of her work — the interface between bench research and clinical care — has led to nearly $27 million in National Institutes of Health research funding and numerous publications, honors, and awards. She has also worked to inspire researchers as they pursue their own multiomics research, innovation, and discovery.

The Welch/Woerner Path-Paver award recognizes a mid-to-late career nurse scientist who has achieved one or more breakthroughs in theory development, research methods, instruments, or subject matter that has paved the way for other scientists and who has influenced and mentored the next generation of nurse researchers.

“I am honored to receive this prestigious award, which is named in honor of Dr. Colleen Conway-Welch, the former dean of the Vanderbilt School of Nursing and Ms. Louise Woerner, a founding member of FNINR,” Dorsey said. “It has been my great privilege to work with nurse scientists and trainees from around the country to advance the use of multiomics methods to more fully understand the symptoms associated with chronic disease and disease treatment, to improve the quality of life for those who suffer.”

“We congratulate Dr. Dorsey on her receipt of this very prestigious honor from FNINR,” said Jane Kirschling, PhD, RN, FAAN, dean of the University of Maryland School of Nursing. “Dr. Dorsey’s expertise and excellence in research encompasses the scientific skills and spirit of inquiry, which allow her to address difficult and significant problems as a nurse researcher in her own right, and she also possesses an exceptional ability to engage a wide range of interdisciplinary colleagues at both national and international levels to advance and accelerate high-impact science through multi-investigator grants and funded centers. Dr. Dorsey has worked tirelessly to assemble and lead teams to tackle clinical problems that have a high impact on quality of life and functional status. She is a gifted scientist able to translate science to the bedside and back to the bench, and we are thrilled that her work has been recognized by FNINR.”