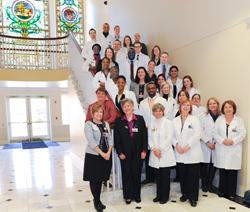 Students and faculty of the University of Maryland School of Nursing (UMSON) met with lawmakers and state officials on Feb. 15 during the School's 2012 Advocacy Day in Annapolis. Bearing materials that helped show the School's impact in strengthening the delivery of health care in the state, more than 30 students visited legislative offices and several shadowed individual lawmakers.

Graduates of UMSON comprise more than 40 percent of Maryland's nurse workforce and the School educates its students at clinical outreach sites throughout the state. On Advocacy Day, UMSON representatives distributed maps showing the number of clinical sites in each county. At the undergraduate level, for example, 46 students were being educated at sites in eight counties and Baltimore City. At the graduate level, a total of 479 master's, 45 clinical, and 20 doctoral students were being educated in 20 counties and the city.

Students encouraged legislators to support funding for the Loan Assistance Repayment Program and to continue to support the Governor's budget request for the University of Maryland. They also told lawmakers that they are thankful for having access to top-notch faculty and a variety of clinical opportunities.

Upon their arrival in Annapolis, the students were welcomed by Patricia Morton, PhD, RN, ACNP, FAAN, professor and associate dean for academic affairs at the school, and by UM President Jay A. Perman, MD, who discussed the role of advocacy. "Anything we say," he said, referring to university leaders, "pales in comparison to what you say. I'm convinced they (legislators) care about you, and about what you're going through as you prepared for a career."

Several legislators also greeted the group of about 50 students and faculty members. Among those offering remarks and advice were Del. Shirley Nathan-Pulliam, MAS, BSN, RN, a 1980 alumna of UMSON who represents Baltimore County, Del. Adelaide Eckardt, MS, RN, a 1981 alumna who represents several counties on Maryland's Eastern Shore, and Sen. Karen Montgomery, MFA, who represents Montgomery County. "Keep your skills up and your backs strong," Montgomery told the group.

Carolyn Quattrocki, JD, executive director of the governor's Office of Health Care Reform (OHCR), addressed the group on how the nursing profession is likely to be affected by the state's implementation of the Affordable Care Act. "We view it as providing a toolkit," she said, adding that the federal law gives OHCR "a lot of discretion to implement health care reform and make changes in our state that work well for Marylanders."

Boulanger, a Master's of Science in Nursing student, said she was honored to have spent the day with Haynes. "I felt so privileged to have the delegates take an interest in the needs and ideas of the students in their jurisdictions. They not only allowed us to shadow them but to also be engaged in their meetings." She said the experience showed her that the legislators "truly valued our opinions and ideas."

Article originally published March 4, 2012 by the University of Maryland Office of Communications and Public Affairs.