Baltimore, Md.—Earlier this week, leaders from Maryland hospitals and nursing schools outlined a bold new strategy for solving Maryland's nursing crisis by doubling the number of nurses educated in Maryland. Janet D. Allan, PhD, RN, CS, FAAN, dean of the University of Maryland School of Nursing, was one of five presenters at a press conference held at the Maryland Hospital Association where the plan, “Who Will Care?” was unveiled. Presenters warned that without action, the shortfall of nurses could reach 10,000 by 2016. 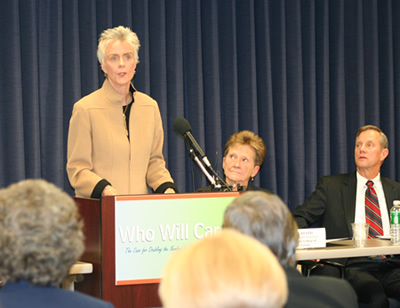 The plan calls for an increase of 1,800 in the number of enrollees of first-year nursing students beginning in 2009 and continuing into the foreseeable future. This can only be achieved by increasing the number of nursing faculty and by funding the educational infrastructure to support increased numbers of students, both clearly addressed in the plan. The group placed a price tag on the plan in year one of $34 million and $25 million in the next year. Initially, two-thirds of the funds will stem from public sources and one-third from the private sector. Over time, the plan will become self sustaining.

“Maryland is the first state in the nation to develop a comprehensive plan to solve this critical problem,” said Dean Allan. “Ending the nursing shortage is crucial to the public health. A solution is in sight, and it is our responsibility to act now.”

Dean Allan, along with Carolyn Yocom, PhD, RN, FAAN, associate professor and chair of the School of Nursing's Department of Organizational Systems and Adult Health, were among the 27-member work group that developed the plan.

The press conference has received extensive coverage in a variety of regional media outlets. See links below for press coverage that includes Dean Allan and/or BSN student Hershaw Davis, who was also interviewed by the press.