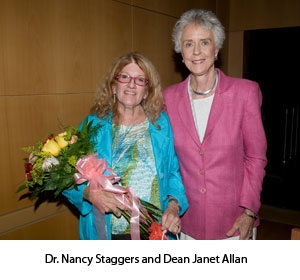 Baltimore, Md. – Nancy Staggers, PhD, RN, FAAN, a professor at the University of Maryland School of Nursing (UMSON) and a two-time graduate of the School, announced that she has included UMSON in her will, with a $1 million bequest to establish an endowed professorship in nursing informatics. Staggers announced her gift last week at UMSON’s 21st Annual Summer Institute in Nursing Informatics, an event that she co-chaired.

Staggers, a 1985 graduate of UMSON’s master’s program and the first graduate of its PhD program in nursing informatics, joined the faculty in 2010. She has an extensive background in clinical informatics, from determining user requirements to application prototyping, system selection, large systems implementation, and enterprise system evaluation. She has held a variety of executive positions, including associate chief information officer, Information Technology Services, for the Health Sciences Center at the University of Utah; program director for the $138 million enterprise clinical information systems at Catholic Healthcare West; and director for corporate informatics at the U.S. Department of Defense. She retired from the U.S Army in 1998 after 25 years of service, and was the first formally trained informatics nurse in the Army Nurse Corps.

“I would like to make a difference going forward, and this is one small way to do that,” says Staggers. “I am happy to be in a position where I can give back to the School because I received such an extraordinary education. It allowed me to be a leader in informatics when folks couldn’t spell ‘informatics.’”

“We are extremely grateful for this extraordinary gift from Dr. Staggers,” said Janet D. Allan, PhD, RN, FAAN, dean of UMSON. “By supporting an endowed professorship, her gift will also help strengthen the research efforts for generations of nursing informatics students.

The University of Maryland School of Nursing, founded in 1889, is one of the oldest and largest nursing schools, and is ranked eleventh nationally. Enrolling more than 1,700 students in its baccalaureate, master’s, and doctoral programs, the School develops leaders who shape the profession of nursing and impact the health care environment.