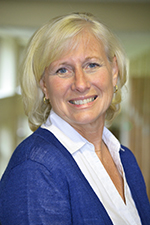 Baltimore, Md. – Catherine Haut, DNP '10, MS '93, RN, CRNP, PNP, assistant professor, University of Maryland School of Nursing (UMSON), has been elected president of the National Association of Pediatric Nurse Practitioners’ (NAPNAP).  Haut, who begins her term as president-elect on July 1, is only the fourth member of NAPNAP’s Maryland chapter to be appointed national president.

As president-elect, Haut will be working closely with the current president in preparation for leading the executive committee and teaming with NAPNAP’s chief executive officer to represent the Association on pediatric initiatives, policies, and practices once she assumes the presidency. Executive committee members serve three-year terms, beginning as president-elect for a year, followed by a year as president. After their presidency, they complete their term with a year as past-president.  Haut becomes president in July 2015.

“It is truly an honor to be elected by my Pediatric Nurse Practitioner (PNP) colleagues, and I look forward to representing them in many facets of pediatric health care.  In my role as president, I hope to support the NAPNAP mission of empowering PNPs and their health care partners in enhancing child and family health,” Haut said. “I am looking forward to increasing the visibility of the role of PNPs through working with other organizations while representing the interests of pediatric nursing and medicine.”

NAPNAP is a professional association that actively advocates for children’s health through providing funding, education, and research opportunities for pediatric nurse practitioners.  The Association seeks to empower PNPs and their health care partners to enhance child and family health through practice, leadership, advocacy, education, and research.

“We are very proud of Dr. Haut for assuming this important national leadership role for pediatric nurse practitioners,” said UMSON Dean Jane Kirschling, PhD, RN, FAAN. “I am confident that she will excel in representing the interests of pediatric nursing while serving as an ambassador for the University of Maryland School of Nursing.”

The University of Maryland School of Nursing, founded in 1889, is one of the oldest and largest nursing schools, and is ranked eleventh nationally. Enrolling 1,700 students in its baccalaureate, master’s, and doctoral programs, the School develops leaders who shape the profession of nursing and impact the health care environment.