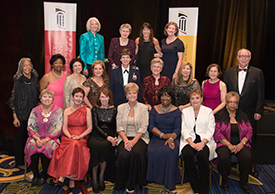 Baltimore, Md. – A spectacular gala, held April 18 at the Baltimore Marriott Waterfront Hotel, concluded a year of special events celebrating the University of Maryland School of Nursing’s (UMSON) 125th anniversary. Nearly 500 people attended the celebration, which honored the School of Nursing’s 25 inaugural Visionary Pioneers. The Visionary Pioneer Award winners are alumni who have made a significant impact on—and contribution to—the field of nursing based on leadership, innovation, or entrepreneurship.

“We gather here to celebrate this significant anniversary in the School of Nursing’s history and to give it special meaning by honoring the School’s 25 inaugural Visionary Pioneers,” said Kirschling. “I am delighted to announce that gala sponsorships and gifts, combined with the University of Maryland Baltimore Foundation’s generous match of 50 cents on the dollar, have resulted in more than $274,000 raised for the 125th Anniversary Endowed Scholarship Fund.”

At the end of the program, Kirschling made another major announcement – the School received the largest gift in its history, $5.2 million, from Bill and Joanne Conway through their Bedford Falls Foundation. The gift will enable the School to expand enrollment in its traditional Bachelor of Science in Nursing (BSN) program, increase opportunities for registered nurses to obtain their BSN degrees, and provide full scholarships to the 157 new Conway Scholars.