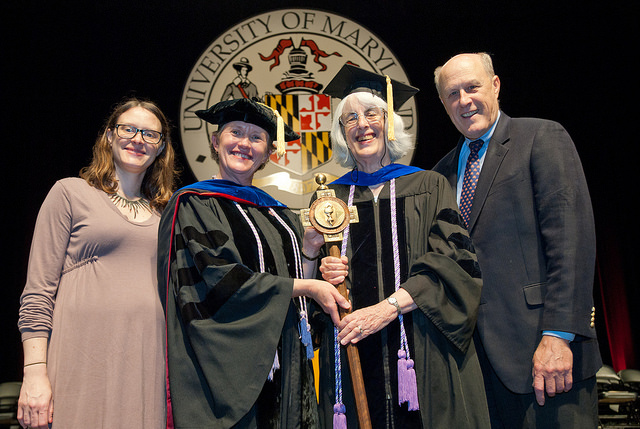 Heavy rain did not dampen the spirit of School of Nursing graduates who celebrated the successful completion of their nursing degrees Friday, May 16, at the Baltimore Arena. The Class of 2014 consisted of 289 Bachelor of Science in Nursing,  288 Master of Science, 13 Doctor of Nursing Practice, and five PhD graduates, making it the largest class of nursing graduates in the state of Maryland

The ceremony began with the presentation of the School of Nursing’s new ceremonial mace by Jay A. Perman, MD, president, University of Maryland, Baltimore (see below). Convocation speaker Susan D. Finlayson, DNP, RN, NE-BC, senior vice president of operations at Mercy Medical Center, Baltimore, shared two principles for graduates to add to their toolboxes – the first, to begin with the end in mind; the second, to always strive for excellence. “I don’t know what your differences will be, but I do know that if you stay true to your values, begin with the end in mind, and always strive for excellence, you will end the day knowing you have done what you could and that tomorrow is a new day,” she said.

Two faculty members were honored with Excellence in Teaching Awards. Regina Donovan Twigg, DNP, RN, assistant professor, received the award for undergraduate education, and Kathryn VonRueden, MS, RN, CNS-BC, FCCM, associate professor, received the award for graduate education. This is the first time these awards had been presented, beginning a new tradition at the School of Nursing.

Professor Sandra McLeskey, PhD, RN, who is retiring this spring, had the honor of being the first carrier of the new ceremonial mace, leading graduates and faculty members from the arena at the close of the ceremony.

"What's your work? What is your purpose?" challenging them to build careers that would provide gratifying replies at some point in the future. In his remarks, the best-selling author and entrepreneur said they should be concerned not so much where they will work but to whom it will matter that they did so.

Click here to view a slideshow of Convocation 2014 photos.

The ceremonial mace presented to the School of Nursing at Convocation 2014 by Jay A. Perman, MD, president of the University of Maryland, Baltimore (UMB), celebrates the School of Nursing‘s 125th anniversary. Ceremonial maces are ornamental staffs made of wood and metal that are carried by an honored designee at graduation or other significant university events. When used, the mace is a focal point of the beginning and ending processionals.

The School of Nursing’s mace was crafted by Bruce Jarrell, MD, FACS, senior vice president, academic affairs and chief academic and research officer at UMB, with the assistance of his daughter, Gwynneth, BSN ‘06. The walnut staff is topped with a bronze and copper replica of the School of Nursing Alumni Association pin. The design of the steel mace holder is based on elements of the Maryland state flag, and was created by Ukrainian blacksmith Anatoliy Rudek and Dr. Jarrell. The oak and ebony base was crafted by Dr. Jarrell’s sister, Bess Naylor, a UMB alumna who received a master’s degree from the School of Medicine in 1977. When not in use, the mace will be prominently displayed in the School of Nursing building.