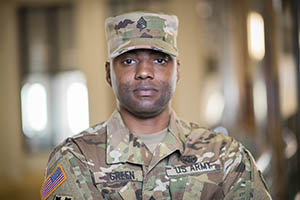 As a young child, Staff Sgt. Hasani Green, BS, LPN, would watch his father don his U.S. Air Force uniform. “To me, it was like he was putting on a superhero cape,” recalls Green, an UMSON Clinical Nurse Leader master’s student. “He wore it with such pride.” Green assumed he would follow in his father’s footsteps. But after high school, he decided to get his bachelor’s degree in sociology and behavioral health care from the University of South Florida and upon graduation, he worked in the housekeeping department of a local hospital while considering his options. “One day, I was watching a nurse in a patient’s room, pushing buttons, doing readings — it was fascinating,” he recalls. “She really seemed to love her job, just like my dad. She told me nursing needs more men, and I should pursue it.”

Green decided to get his initial medical training in the Army and was deployed to Afghanistan as a medic. “I never realized the importance of practicing things over and over,” he says. “But when you’re in a combat zone, what you do has to be automatic. On some level, your brain registers gunfire, rockets, yelling, radio static — but your primary focus is on evaluating and treating your patient.” Green’s very first casualty in the field did not make it, and it was devastating for him. “I know not every outcome is in your control,” he reflects. “But I was trained to save lives, not lose them.”

Green left active duty after eight and a half years, enlisted in the Army Reserve, and is currently pursuing his degree full time. As an Army licensed practical nurse, he worked in postpartum/labor and delivery where, he said, he was a bit of a pioneer. “You see a lot of male nurses in the ICU and the ER, but not so many where I was,” he says. “Males aren’t well represented in academic nursing either. Ultimately I’d like to teach and be a part of changing that.

“Nursing is intimate,” he continues. “It’s about empathy and respect. I’ve cared for a baby two hours old and a man who was 99. Helping people enter and leave life is very special. I feel blessed to get that sense of accomplishment from my career.”