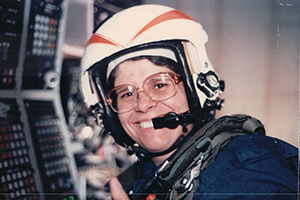 Retired Capt. Diana Cangelosi, MS ’17, began her UMSON studies after a 30-year career in the Navy. “But my nursing journey really began more than 40 years ago,” she recalls. “My undergraduate biology lab partner was an older student, a nurse who was refreshing her credentials after raising her family. As a teenager, I was deeply impressed by her return to school late in life. Together, we earned the instructor’s ‘star of excellence’ for our lab work. She inspired me and ever since I’ve considered a career change later in life.”

Cangelosi attended college on a ROTC scholarship and majored in education; though she had wanted to pursue nursing, the military was downsizing the pool after the Vietnam War. She was commissioned in 1981 and had a groundbreaking and varied military career. Only the second woman student naval flight officer ever selected for high-level training in jet aircraft, she flew reconnaissance and combat missions in Bahrain in support of operations Desert Shield and Desert Storm. At sea, she served aboard the USS Theodore Roosevelt as combat direction center officer during its post-9/11 deployment for Operation Enduring Freedom. In addition, she held roles as commanding officer of the Naval Satellite Operations Center and as the sexual assault response coordinator at the U.S. Naval Academy.

Returning to school after a decorated career was an adjustment, Cangelosi admits. “I overestimated my ability to jump back into the classroom, and it was humbling and also funny,” she says. “I was used to people coming to attention when I entered a room, and suddenly I was just some older lady in an intro class.” 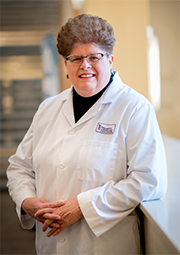 Cangelosi aspires to work with her fellow military members at the U.S. Veterans Health Administration and eventually serve on one of the nongovernmental traveling hospital Mercy Ships as part of a medical team that provides health care in developing countries. But she says it’s one step at a time: “Right before graduation, one of our professors was going around the room asking what everyone’s future goals were. I said that being a damn good nurse would be enough for me, just being able to help individuals,” she says.

Remembering her long-ago lab partner, Cangelosi wonders if she reminds her classmates that it’s never too late to tackle another challenge. “You give back in the military, and that continues into civilian life,” she says. “You can always learn something new.”

Top photo: Cangelosi in her aircraft, circa 1985

Bottom photo: A recent photograph of Cangelosi taken at UMSON.